Baklava and the Beauty

February 26, 2011
Today was Greek day at our house.  Actually, we had to make Baklava for an awards ceremony earlier tonight.  The kids had to dress up for said ceremony.  My husband also taught us a few greek terms like moose ca ca and if you haven't seen My Big Fat Greek Wedding, you're seriously missing out, and well, probably don't get the joke.
Phyllo dough is really cool and a bit touchy to work with.  I honestly had never made Baklava before but have made meat pies with phyllo.  We were a bit worried when we put it into the oven but after it was baked to a golden perfection and the honey sauce was poured over the top, it was lovely.  I didn't get any pictures of the final product in the cupcake papers but I should have!  In case you're wanting a recipe, we used this one at AllRecipes.com. 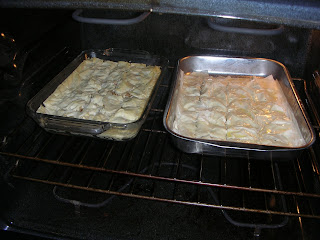 We literally had about 10 minutes to find something Greek-ish to use for the dress-up portion of the evening since I didn't realize everyone was to dress up.  It apparently worked out ok because my daughter won 3rd prize and "most unique" for her Greek get-up.  Thank goodness for those huge costume boxes I insist on keeping.  Honestly though, the "sash" we used made her look more like she was trying to be a beauty queen instead of Greek.... I guess that's what happens when you're fresh out of togas. 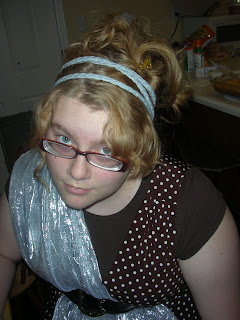 Hope everyone has been having a wonderful weekend!
Thanks for stopping by!

... said…
Love baklava...just had it a few days ago (store-bought). That looks wonderful.