May 01, 2011
Last night we got the chance to see Yanni live in concert.  I really don't know what we were expecting but it was so much more! 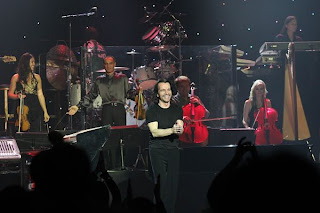 What really stunned us was the sheer talent of Yanni's orchestra.  Each of the instruments was played with such ease yet the complex sounds coming from mere wood, string and brass were truly a thing of beauty.  Drummer Charlie Adams is not only an impressive percussionist but an amazing entertainer.  For his concert solo, he donned a Utah Jazz jersey and stripped that off to reveal a Real Salt Lake jersey.  In fact, the whole concert had a more personal intimate feel to it.
The cello, played by Alexander Zhiroff, brought a whole new admiration for the instrument.  And we have never seen the harp played with such fire and ingenuity as played by Victor Espinola.  Another favorite was Mary Simpson on the violin.  Each and every one of the musicians brought a beautiful piece of talent to the music.  My personal favorite was Samvel Yervinyan on the violin.  I cannot begin to describe the intense grace and refinement to which he made that violin sing with a combination of strength and softness. The passion of the concert was addictive.  Yanni brings a real sense of genuine love to his music and more than once my daughter leaned over to me and said 'he seems like such a sweet guy' or something very similar.  He mouthed the word 'perfect' to violinist Mary Simpson after one solo and my daughter nearly melted.  The absolute crush of emotions and senses that Yanni must have felt while composing the pieces was heartily conveyed at the concert.  It was an upbeat, serene, delightful experience.
We received complimentary tickets to this venue from our relationship with the One2One Network.  All opinions are strictly unbiased and honest.

Malia @ One2One Network said…
We're so delighted that you enjoyed the show! Yanni is quite the performer and he surrounds himself with amazing talent!