What a HORRIBLE Month! 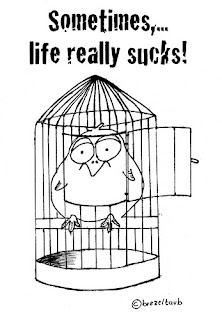 Sometimes I feel like we're drowning in a moneyless sea of ruined economy.  Although "sometimes" should be "daily".  For those that don't know, Mr. Artsy Chaos is a contractor.  A residential home building contractor.  Since there is about zero going on in the residential home building market, that equals about zero opportunity for a residential home building contractor.  When you've sunk 20+ years of your life into a career that basically doesn't exist anymore, well.... no one is interested in what you can bring to the table.  Hence, the drowning.
Since the first of the month, my mother has been in the hospital having and recovering from open heart surgery.  This is her second open heart surgery, the first she had at age 45.  It's been a scary few weeks.  We nearly lost her in surgery this time as they couldn't stop the bleeding during the 10+ hour operation.  For 3 days after surgery she was unresponsive and on a ventilator. Even when she woke up, she didn't recognize anyone and seemed confused.  We were all very worried to say the least.  She is now on the mend, but has a ways to go.  I'm so thankful she came out of it.
So again I say, this month bites.  Here's to hoping a month comes soon that doesn't.

Nikki said…
I'm so sorry you're having a rough month. I'm glad your mom is on the mend though! As for contracting work, my friend's husband is in the same business and it is just brutal right now. Another friend's husband went back to school for medical billing, but even that is pretty competitive these days. Hopefully it will all get better soon.
4/20/2011 8:54 PM

Susan W. said…
Yes, I would say your month hasn't been so good. My other half had heart sugery 1.5 yrs ago, at 42. He too, had issues with bleeding, and had to be opened up a second time to have blood clots removed as they couldn't pass through the chest drains. Then his lungs filled up w/two quarts of fluid which he had to be put out for as he saw the needle they were going to use to drain it...and passed out on them. From there...it was such a slow recovery. I am glad to hear your mom came out of it after all the issues she had. Last month, I almost lost my son to pneumonia. It's not a good feeling wondering what will happen next. And, you feel so helpless. May must bring you showers of smiles. Take care.
4/20/2011 10:43 PM